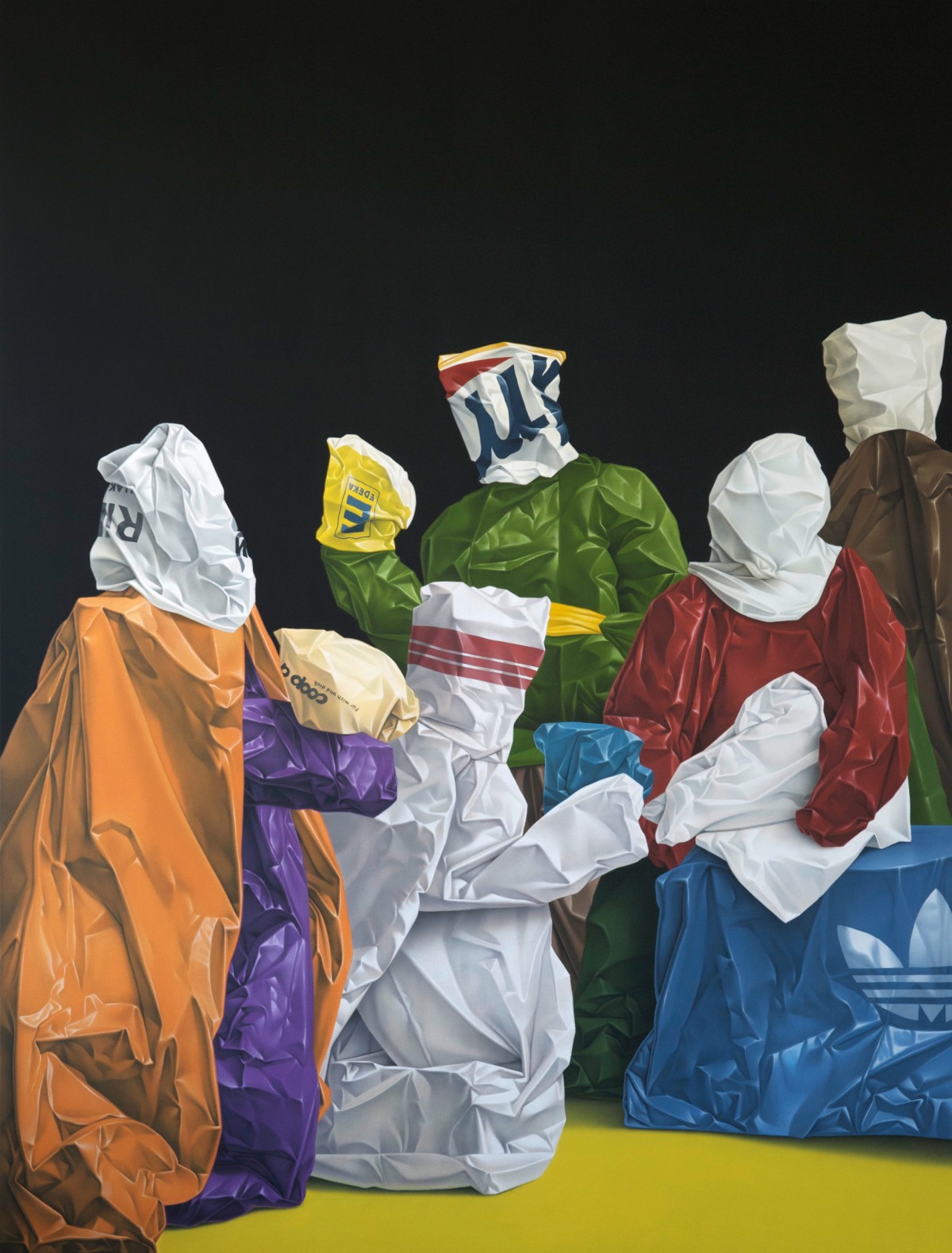 ‘Adoration of the Magi’ by Eckart Hahn, 2011 (after Pieter Paul Rubens), acrylic on canvas, collection Museum am Dom, Würzburg

The biblical scene of the Holy Family on Christmas Eve, familiar to the viewer, is visibly reduced. Reduced to the figures directly involved in the event and to the gifts of the Magi - all and completely wrapped in coloured plastic bags and packaging materials. Only the arrangement of the life-size painted figures exposes the scene as a manger situation.

The baby Jesus, wrapped in "innocent" white plastic, lies on a table-like object covered by an oversized Adidas bag. Mary is wrapped in red wrapping paper and wears a white plastic bag over her head, she holds her arms protectively around her child. The fact that the artist dresses Mary here in red instead of the blue familiar from iconography may be seen as a reference to her love for her Son or to the anticipated sacrificial death of Jesus.

Behind Mary and the child, the only figure only cut in and not depicted in its entirety, stands Joseph, in a meaningless brown plastic, even his face has disappeared under a white bag. One might almost understand his posture as being turned away from the scene or at least with his hands clasped together in horror in front of his mouth. Given his role in the whole story, this near disappearance of the figure does not surprise the viewer.

Two of the three kings, all dressed in different coloured wrapping paper or packaging materials such as a dm bag, kneel before the child, their gifts in their hands - lovelessly wrapped in an Edeka, Coop and (presumably) an Adidas bag.

The place of the holy event is reduced to a sterile and cold mustard-green background and a night-black background without any source of light. How the three kings found this place without the legendary star of Bethlehem remains unanswered for the viewer.

The scene seems alienated from the biblical event and its theological core. One searches in vain for the message of salvation of the baby Jesus in all this plastic - after all, the incarnation of God seems ironic in the face of a white plastic bundle.

The persons remain faceless. The viewer has no chance of recognising behind the plastic what the event of the Holy Night does to people. Has Christmas now become a private matter even for those directly involved? Does everyone behind the mountain of wrapping paper and plastic bags decide for themselves how much Good News is reflected on their face?

Even the gifts of kings no longer convey the joy of giving and being given. It remains hidden under the packaging and interchangeable as a consumer article of certain brands. "The Adoration of the Magi" is obviously no longer for the child, but for business and advertising.

Compared to traditional depictions of the nativity scene, it is clear that the stable as a place is missing and with it the manger - as a sign of absolute poverty, which is contrasted here with the brand names. Likewise, the depiction of all heavenly signs (star and angel) as well as the essential representatives of the earthly (shepherds and animals) is omitted. The attributes of the living in the stable situation give way to a sterile, loveless artificiality. And this awakens in the viewer the desire to gather up the whole sculpture and dispose of it.

From: "ECKART HAHN: WORSHIP OF THE KINGS, by Kirsten Rabe"

Visual with the Kind Permission & Courtesy of the Artist, Eckart Hahn